43.6K
Classification:
News
Source:
Anutric
2019/01/16 00:01
Page view
[Abstract]:
According to several managers of Anutric, the chairman of the board is a food expert. He studied food in the country and went to Australia to study for a master's degree in business administration. He has worked in marketing and management in several Fortune 500 companies. From the first day of entrepreneurship, Fang Ce has set an goal for Aniuxi to "do the best infant formula in the world and let Chinese babies enjoy truly high quality products."

This newspaper (Reporter Wang Guanghuai) On January 5th, at the China Food Newspaper's 40-year summit to witness the development of China's food industry and the 35th anniversary of the China Food News, a batch of Chinese food industry has been reformed and opened for 40 years. Elite enterprises have won the honor of "Outstanding Enterprise in China's Food Industry", and Aniuxi (China) Co., Ltd., which focuses on the production of infant formula milk powder, is on the list. As a company that has entered the infant formula milk powder industry for more than ten years, what are the stories behind the brand? The reporter recently interviewed Anutric (China) Co., Ltd. (hereinafter referred to as "Anutric").

Entering the industry during the trough

According to several managers of Anutric, the chairman of the board is a food expert. He studied food in the country and went to Australia to study for a master's degree in business administration. He has worked in marketing and management in several Fortune 500 companies. From the first day of entrepreneurship, Fang Ce has set an goal for Aniuxi to "do the best infant formula in the world and let Chinese babies enjoy truly high quality products."

"I chose to enter the field of infant milk powder. The original idea came from the understanding and inspiration of the foreign dairy industry during the study abroad." During his studies abroad, he visited many dairy companies in developed countries. The quality of these dairy products and the beautiful and beautiful pastures of these countries have left a deep impression on him.

"To enable Chinese babies to enjoy safe, nutritious and high-quality milk powder," Fang Ce gave birth to the idea of ??returning to China to enter the infant and goat milk industry. According to the data, infant formula has started late in China. It has only been more than 20 years since then. In 2017, the national dairy production reached nearly 30 million tons, of which goat milk accounted for less than 5% of total production. Goat milk powder is rich in nutrients, small in molecular weight, easy to absorb, and not susceptible to allergies. It is a very good choice when breast milk is insufficient. Fang Ce believes that over the years, the goat milk products market has not yet formed, which gives new entrepreneurs the space to create excellent products in this blue ocean market. The top policy has certain food professional and management advantages, so it is decided to enter this industry. . 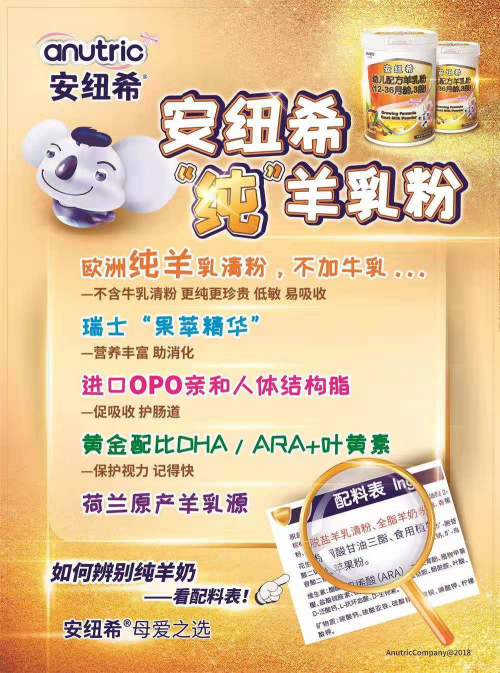 In 2003, the infant formula milk powder "big head doll" incident made the party policy feel uncomfortable, and the entrepreneurial passion was so good that it bid farewell to the top 500 enterprises and began to build a baby milk powder enterprise. The "melamine" incident in 2008 further ignited his ambition to make high-quality infant formula. He believes that opportunistic and short-term business will inevitably have problems. It is determined that a century-old enterprise with social responsibility and professional ethics can be based on the field of infant formula milk powder. He raised funds to build enterprises, optimize milk sources, research and development products, and market promotion. All work was carried out in an orderly and orderly manner, demonstrating the accumulation of his professional knowledge and management experience. Hao Youhua, a brand manager who has worked in the company for 11 years, introduced that in order to encourage everyone to actively learn, Fang Ce purchased a lot of professional books and established a book corner in the office. In the early stage of the business, the company has not yet put into production, and issued red envelopes to employees at the end of the year to improve staff morale. To make employees feel warm.

Fangze established the Infant Food Company in 2007. In 2008, a new formula of goat milk powder suitable for Chinese infants and young children, which was produced from imported high-quality milk sources, was launched.

China's infant and goat milk powder industry started late, how to stand in the market? Fang Ce said that the dairy industry, especially the infant formula, has little difference in the level of process equipment. The core competition is quality. The first priority is the source of milk. The major problems in these dairy industries are highlighted in the quality of milk sources. In the new era, people need nutrition, health, safety and quality consumption. Compared with the excess of raw materials required by many food industries, the source of goat milk, especially high-quality goat milk, is still relatively tight.

The global selection of milk sources is a top priority for this company. According to the company's experts, the quality of goat milk source depends not only on safety and nutrition, but also on stability and the growth environment of the dairy sheep. Anutric's core competitiveness is the production of high-quality infant milk powder with an enterprise standard that is superior to national standards. To this end, in the initial stage of product development, they conducted a large number of research and investigations on the quality of milk sources in the domestic and foreign markets.

According to reports, dairy goats grow in the natural pasture environment, do not use hormones and antibiotics, the milk source is natural and pure, nutritious, milky and mellow. After extensive investigation and analysis, Anutric finally chose the world famous goat milk source base - the Netherlands, whose goat milk is famous for its good nutrition index, natural cleanliness, good flavor and stable quality. From the perspective of raw material prices, Dutch goat milk is currently more expensive internationally, 10%-15% higher than domestic prices. The high raw milk cost means high product cost and low profit, but Fang said, "For the healthy growth of children, it is worthwhile."

"In order for Chinese babies to eat baby milk powder that is closer to the quality of breast milk, Anutric is willing to invest in raw materials at no cost." The company's R&D technical manager group introduced that high-quality infant formula with breast milk is breast milk. The ingredients are gold standard and are developed according to the nutritional needs of different stages of growth and development of infants and young children. The ratio of whey protein content to total protein in breast milk is 60%. Although the proportion of whey protein in goat milk is higher than that of milk, it is only about 25%. To this end, desalted goat milk powder should be added to increase the proportion of high quality protein. . From the price of whey powder, bovine whey powder is a by-product of processing beef cheese, the price is very low; while goat milk powder needs to be produced separately, plus the milk source is scarce, the by-product sheep cheese has less food, so the price is more expensive. For example, the price of Dutch goat milk powder is about 8 times the price of cow's whey powder. How do consumers understand ingredients and quality? Introducing the square cluster, you can see the food ingredients list at a glance. The National Food Label and Infant Formulation Standards for Infant Formula Registration Regulations stipulate that infant formulas should be sorted according to the proportion of raw materials added, and the main raw materials should be marked with animal sources. Anutric insists on selecting raw materials with high standards, and the use of desalted goat milk powder is the highest in all ingredients. Although the cost is high, the quality of the products is ensured.

Infant milk powder originated from developed countries in the West. It is a product that completely reflects the design of foreign products or develops products based on the nutritional health indicators required for the growth and development of Chinese infants and young children. Fang Ce's thinking has led the company's technological innovation. At present, Anutric has obtained more than ten patents.

According to Sun Hongqin, director of the marketing department of Anutricch, Chinese people are basically farming cultures based on edible plant protein. Many countries in the West are basically nomadic food cultures based on edible animal protein. Westerners eat meat and milk, and the East. People pay attention to the combination of vegetarianism, nutritional balance, and food and medicine. For thousands of years, although there are many blends of Chinese and foreign food culture, the human body's genetic and body structure are different, which involves the nutrition and absorption of food. Therefore, infant formula should combine the physical condition and nutritional needs of Chinese children in research ingredients. The scientific and technological problems in modern food processing or food technology must consider the health effects of food on the human body. In the "Yellow Emperor's Canon", it is proposed that "the grain is the nourishment, the five fruits are the help, the five animals are the benefits, and the five dishes are the full". Combining the rich and colorful Chinese food culture with the western food culture essence can promote the healthy growth of Chinese babies. In order to popularize nutrition knowledge, Annihi has carried out nearly 900 kinds of public welfare science activities in the country in 2018, which is welcomed by pregnant mothers and mothers.

"Essence of Fruit Extract" is An Inch's innovative pen. After an in-depth study of the nutritional needs of infants and young children in China, the Anutric research team added the “fruit extract” extracted from fruits and vegetables to the infant formula milk powder for the first time in China, which better complements the growth of infants and young children. The demand for vitamins and dietary fiber solves the problem of poor feeding and adverse reactions of baby fruits and vegetables.

Anutric's three inventions and continuous improvement of the milk can lid have become a good story in the industry. "A 'high cover' won not only the national invention patent, but more importantly, our service reflects the humane care." Hao Youhua, the sales manager of Annuxi, said that the cans of milk powder at home and abroad are nothing more than flat cover and There are two kinds of rotating covers, but they are not satisfactory in terms of opening and hygiene. To this end, Annuci designed and launched the world's first infant milk powder canister "high cover" in 2007, and obtained national patents, and then improved three times to make it more convenient, healthier and more humane. When using it, use a thumb to gently pick it up, the lid connected to the tank is opened, the quantitative powdered milk spoon is embedded in the lid, and the spoon is gently pressed back to the original place, avoiding the spoon contact person. Contamination caused by contact with milk powder after your fingers.

This invention has been imitated by many companies, and some even found a manufacturer that can process cans for Anutric, directly processing it with Anutricch special molds. Regarding the infringement, there were a lot of discussions among the internal staff of Anneuci. Although the policy was somewhat troublesome, he later relieved: "As long as it is conducive to the healthy growth of the baby and do something for the industry, I have no regrets!"

2019-03-20 00:01
Congratulations on the image of Anutric cartoon koala approved by the National Copyright Administration